The New Zealand Staff Turnover survey was first published in 2006. Consequently, we now have over a decade of data which covers the latest economic cycle. The survey results clearly emphasise the very cyclical nature of staff turnover and its relationship to the strength of the economy.

In 2018 however, we discussed the new forces impacting on the turnover of staff. Firstly, the rapid change to the composition of our workforce. For example, Millennials (those born between 1981 and 1996) currently account for 34 per cent of New Zealand’s labour force and by 2020 will be the majority. 43% of this group plan to leave their company within two years. We know that Millennials have a very different view of work to the Baby Boomers, will they hunker down in their existing job just because the economy is weaker?

Secondly, technology is rapidly changing the availability of new work opportunities to your employees. Big data, AI and Machine learning are enabling recruitment platforms such as LinkedIn to more easily find your staff. The future will be about being found for work, not finding jobs to apply for suggesting that with more opportunities for work being presented to your employees we would expect greater mobility and voluntary turnover.

The results from this survey show that we haven’t seen a full repeat of 2008 yet. What we have seen is a rapid climb in Involuntary turnover at an alarming and almost identical rate to the start of the GFC, but interestingly the size of the rise in Involuntary has not been matched by a fall in Voluntary turnover, in fact there has been no decrease at all.

In these unusual circumstances what can companies do?

1. Measure your staff turnover and compare to other companies in your industry or sector. If your Voluntary turnover is higher than your competitors, it is a fact your business will be less competitive. If it is better than your competitors, you must be doing something right so find out what it is and build on it.
2. Be proactive, identify your key talent and determine their motivators. Develop a range of retention strategies, regardless of the size of your company.

The Lawson Williams National Staff Turnover Survey is supported by HRNZ and is in its 12th year. It provides a measure of staff turnover and has once again produced some interesting findings that assists participating companies to better understand the performance of their recruitment, onboarding and retention processes.

The survey also reports on the use of the 90-day trial period, the reasons for Voluntary turnover and the retention strategies being employed by New Zealand companies.

The average national turnover figure is calculated using the levels of Voluntary and Involuntary turnover. The average New Zealand staff turnover rate in 2017 was steady at 18.8%. In 2018 we have seen a significant increase to 20.5%. 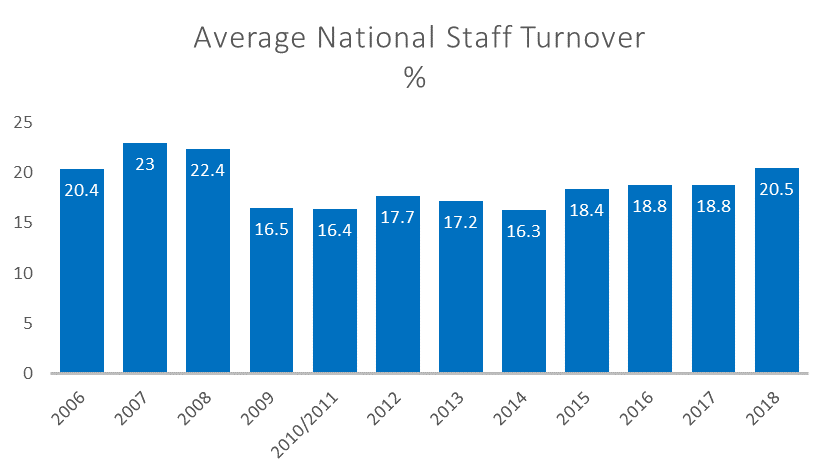 We have not returned to the levels of average staff turnover pre GFC which reached 23% in 2007 and 22.4% in 2008, however the rapid climb in Involuntary turnover to a level of 4.2% from 2.6% has been the contributing factor in pushing the National Average Staff turnover rate to 20.5%.

Several factors appear to be at play here. In addition to the new forces as previously discussed we are seeing a significantly slower decrease in our economic activity. The speed of the fall in growth to a predicted level of 2% for the current financial year is significant but is still positive. This is very different to 2008 where the fall was sharp and took us quickly into recession with corresponding decrease in Voluntary turnover as people became cautious and were less likely to move jobs.

Secondly, we have seen some wage inflation in the past year, lifting the Labour Cost index which is a measure of annual wage inflation by 2%. Higher wages directly impact Voluntary turnover as people are more inclined to leave jobs for higher salaries.

Thirdly, we appear to be operating in a multi-speed economy. Our survey shows that in some sectors such as Accounting Practices, Energy & Electricity, Fast-food & Hospitality, Property & Construction there has been higher levels of Involuntary turnover indicating that these sectors are finding the current market conditions challenging leading to restructure and/or the laying off of staff whereas industries such as FMCG have maintained lower levels of Involuntary and correspondingly higher levels of Voluntary turnover.

One in every 3.1 hires in New Zealand are failing in the first year

Failure of hires in the first year has reached its highest level in twelve years. 31.9% of all hires in New Zealand don’t last beyond 12 months. This is a further 12.3% increase on the previous year’s increase of 14.5%. 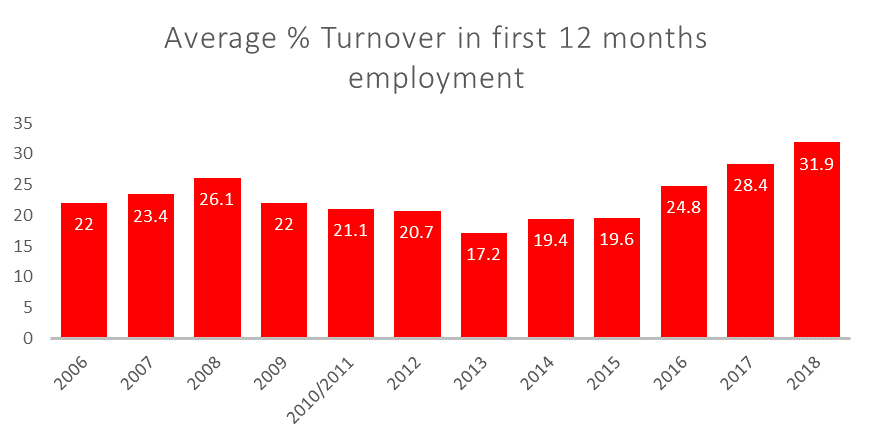 When we consider specific industry or sector results (these figures are provided in the full survey report provided to survey participants) we know that turnover in the first 12 months varies significantly.

However, any turnover in the first 12 months should be seen as a failure of recruitment and on boarding. From 27 years of experience in recruitment, Lawson Williams believes that turnover within the first 6 months of employment is typically a failure of the recruitment process and on boarding. After 6 months the honeymoon period of a new job has typically worn off and staff turnover is more impacted by the lack of or misdirected retention strategies. Our research shows that dissatisfaction with management will more often surface at this point and becomes a significant factor in staff turnover between 6 to 12 months. 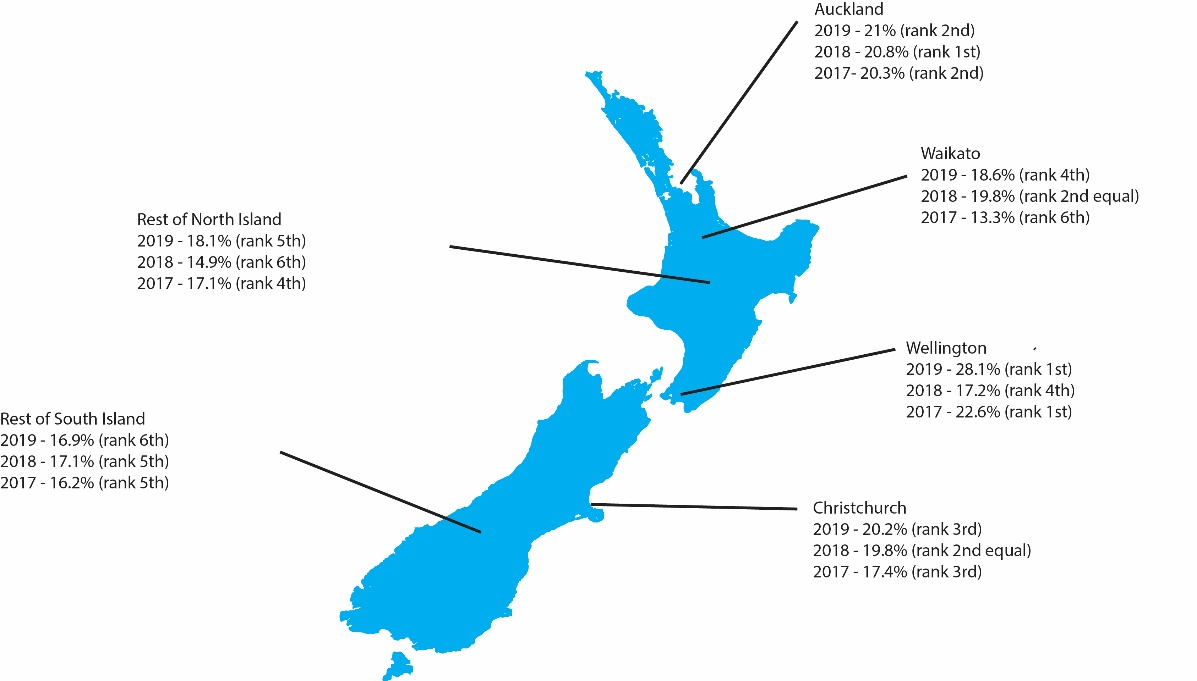 The National Staff Turnover Survey provides turnover data for a range of industry sectors. The real value in Staff turnover measurement is to compare your company turnover against your competitors. Staff Turnover percentages can vary significantly from year to year as shown in the following sample table. 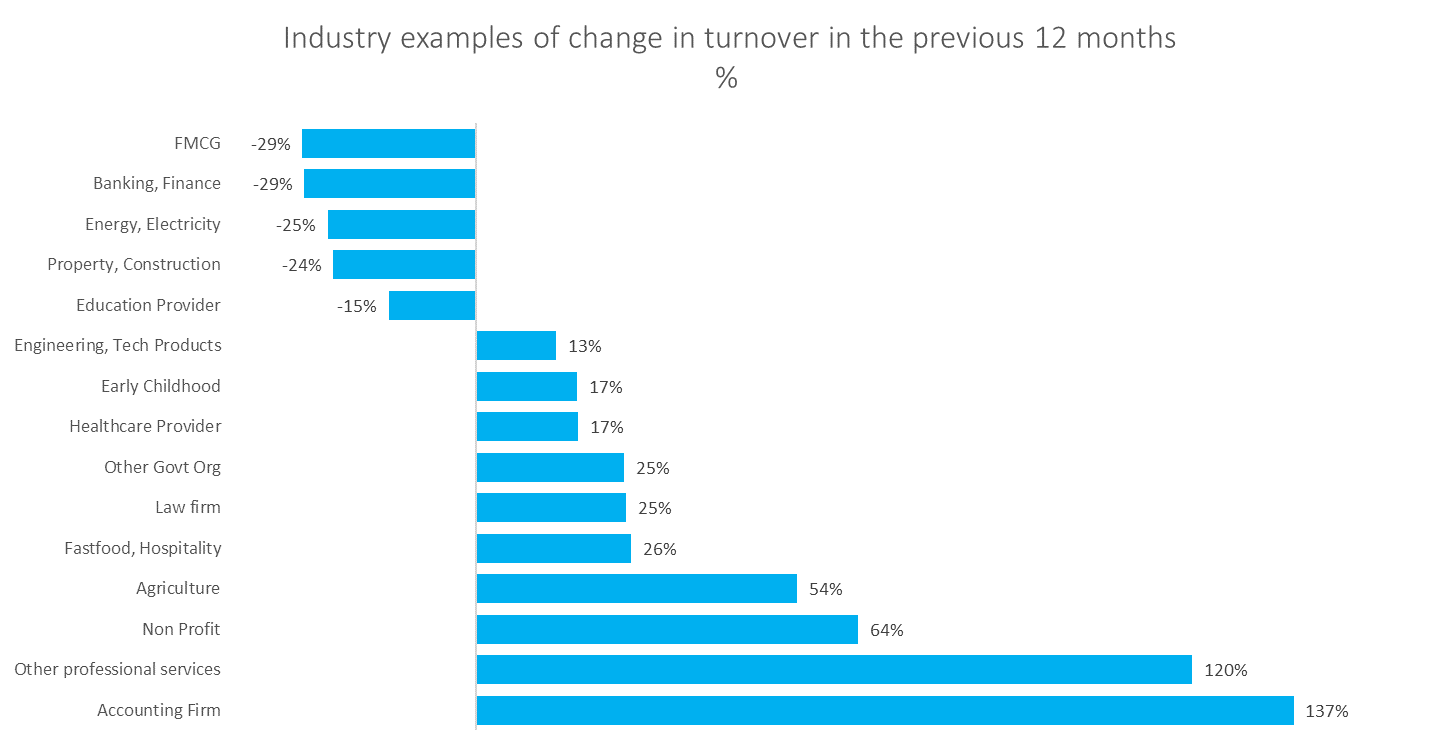 The reasons for leaving employment

81 percent of our respondents reported having a formalised exit interview process. This is up from 74% last years and indicates that an increasing and significant number of New Zealand employers are making proactive efforts to identify the cause of staff turnover and tackle any problem areas.

We asked organisations to identify the top three reasons for voluntary turnover. Family/personal circumstances were the biggest contributing factor for staff departures. 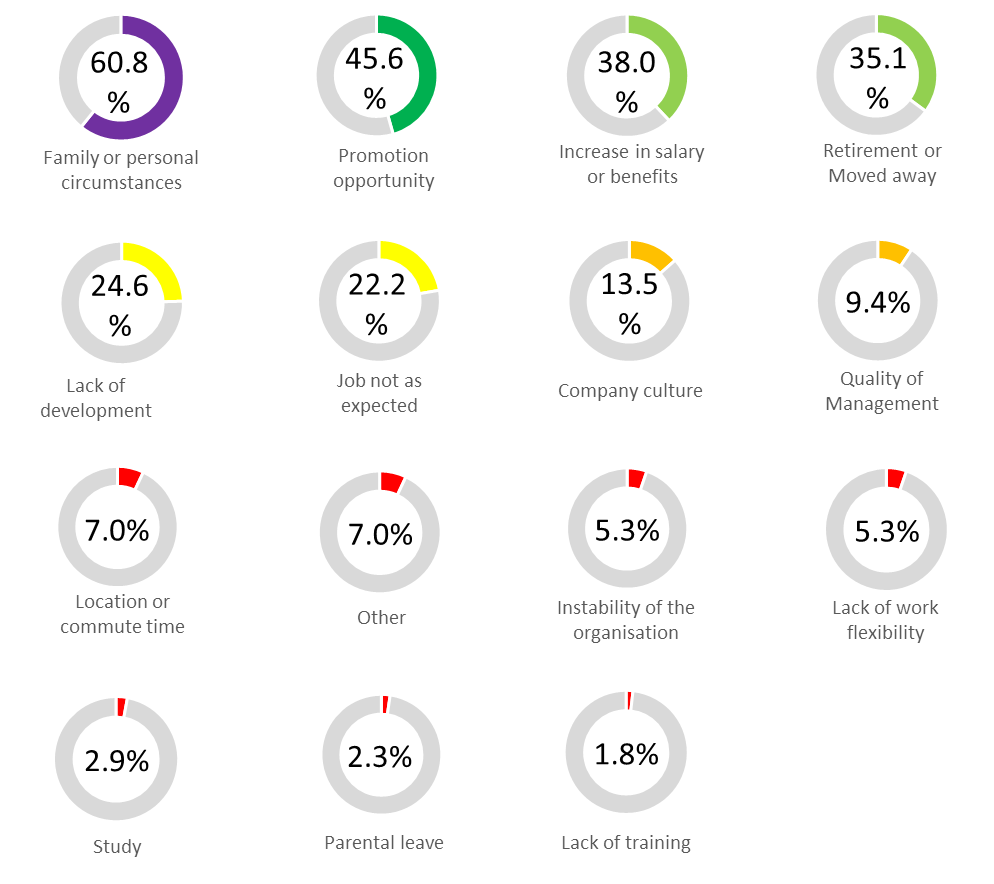 Any business can become part of the National Staff Turnover Survey. It is a free service with all participants receiving a copy of each year’s final report which includes industry specific turnover data. If you we would like to participate, please email John Lawson. The next Survey will be open for participation in April 2020 and will collect data from the 2019 calendar year.

Are you looking for work?

Register with us here. Or View and Search our current vacancies.